In this Devlog we will take a look at all the different types of enemies coming to BLASTRONAUT full game. But first, BLASTRONAUT has never meant to be a typical action game and the enemies too have a slightly different role. Here is the list of requirements for the enemies:

So the obvious solution is to take advantage of the existing gameplay systems and make all the enemies explosive too. For that, I'm giving them the same explosive weapons that the player has allowing them to destroy the terrain too!

Flyer pulls back first and then launches towards the direction where the player was last noticed. Upon reaching it or colliding with any other character he will explode.

Spiky throws his spikes towards the player each one acting as a mini-rocket that leave holes behind.

Alien sprays explosive gel all around him which acts as the player own blaster weapon, but in a much less controlled manner.

Spider is a sentry droid who has quite limited movement and can't climb on walls but substitutes that with a deadly laser beam that eats through the terrain and is the most deadly of them all.

Critter is just a peaceful fella, but he drops fuel so he still gets farmed relentlessly.

Finally, there is also the Floater but I'll leave him for another day as his explosive behaviour is still in development ;)

And now the announcement: BLASTRONAUT is coming to Steam Next Festival that runs from February 21-28 (2022). And it is coming with Online Co-op multiplayer so double the fun. I hope I manage to finish everything in time, so wish me luck. And of course wishlist BLASTRONAUT in Steam to not miss this amazing event! 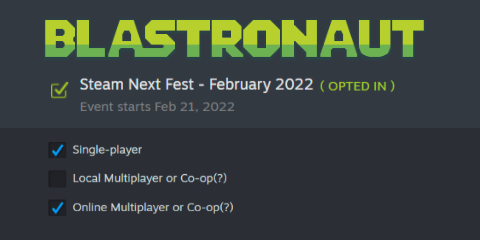