The most recent Steam Festival (Steam Next Fest - February 2022) has just ended and many people have asked me about how it went. So in this DevLog, I will give an overview of how I prepared for the festival, how it went and what are my observations and recommendations for you.

For a quick overview, Steam Festival is a limited period of time (1 week) when Steam shows their upcoming games to the public and advertises this event on their front page. So it can potentially show your game to a huge number of players, the only requirements are that the game has a store page and a playable demo. Moreover, Steam allows participating in their festivals once a year, because they understand that finishing a game can take longer than initially expected.

So let's take a look at the very first festival and see what I did wrong. At the time I had just finished the first demo that is the same that is currently uploaded to Itch.io. I think it is overall quite good; However, when listing it to the festival I chose the 2D Platformers and Open World categories. This was a mistake! Because the game didn't have many wishlists at the time it was really hard to find even when directly searching from these categories. To make things worse I didn't know about the importance of streaming events at the time and I just skipped them. The result was that the game got around 200 new wishlists in total, which was a nice bump but relatively low compared to what many other games have received.

This time I did some things differently from the start. First of all, I had improved the game visuals and capsule image.

Secondly, I chose much more popular categories: Action and Adventure. And finally, I had added multiplayer to the demo, so I could list it under both single- and multiplayer categories. 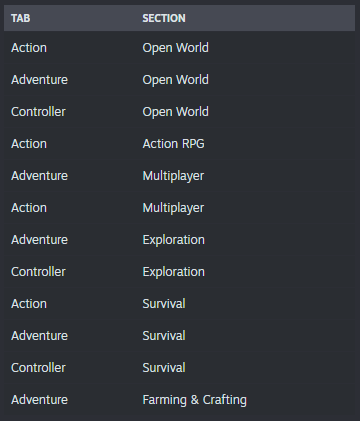 I used this opportunity to improve the demo and add all the core features, including crafting, building and enemies to the game. Unfortunately, I ran a bit out of time and could get it as good as I had wished for. And I don't recommend anyone to work on the demo during the very last day before the festival, because there is so much more that needs your attention. Here are the things that you should do:

1. Make sure that the demo is working on all the intended platforms, and also give it to other people to playtest. I had several game-breaking bugs at the beginning that I luckily managed to fix before the event began.

2. Choose timeslots for your live-stream events and post the events. Timing is really important because you likely want to choose the earliest time slot with the least amount of concurrent streams. The exact time does not seem to matter too much as there are always people in Steam. However, it seems that 14 PM UTC is usually the busiest time according to SteamDB. Also, make sure that you can start streaming before and after this time. To my surprise, about half of the viewers were watching the live stream before the official time.

3. Test the Livestream beforehand. It was my first time to live stream in Steam and I really struggled at the beginning. Steam has written documentation for it, but it takes quite a lot of time to set it up. So when I first started streaming, it wasn't actually visible on the festival page, because I had not given myself permission to stream under my game store page (Special Settings tab). But I eventually figured it out and fixed the issue on the second day.

4. Stream all the time. For that, I simply prerecorded a live stream and made it loop. Everyone is doing it and in my experience, there were between 6 and 20 people watching my stream all the time. I would even recommend recording the video way before the event, it will be much less stressful this way. For example, I noticed that my first recording was quite laggy and had to record it again. It was caused by the OBS web camera background removal plugin.

Before the festival, I had around 2100 wishlists, which is much more than 200 than I had the last time.
On the very first festival day, I had not gotten the streaming working yet, but the number of visitors was already around 600 per day. This peaked at around 1200 on the second day when I had my first live stream event. And it started gradually falling after that. The visits jumped back up on Saturday because an awesome Youtuber Wanderbots (400k subscribers) made a 40-minute video about my demo that day (check the video at the end of the post). And it boosted even higher on Sunday when I had my second live stream, however, the number of wishlists stayed similar to Saturday. Finally, a French Youtuber Dr_Horse (700k subscribers) also made a 19 gameplay video, on March 1st, which kept the number of visitors high even shortly after the festival ended. In the end, I got around 1500 new wishlists in total.

Here is my sketch of the daily wishlist graph during the festival. As you can see the impact is really awesome.

Some observations that I made. First of all, there were more viewers (around 250) during my first live stream event even compared to the second one (around 140) although the first one had some disadvantages:

However, while the first stream was prerecorded the second one was actually live, but unfortunately, I also had some technical issues this time and encountered some bugs that probably lost some viewers. Because the chat is always silent, I would recommend prerecording the stream if it helps to maximize the quality.

Secondly, in his Youtube video, Mr Wanderbots mentioned my custom scenario "Deep Treasures". I didn't include it in the demo, but only showed it during my live stream. This means that he had to see my live stream and this is likely how he learned about the game. So ultimately it proves that live streaming during the festival is essential.

I hope you enjoyed this overview of my Steam festival experience. The new demo is still available in Steam so you should definitely try it. And finally, please wishlist my game if you haven't done it yet, it really helps me a lot. Thank you!

Video made by Youtuber Wanderbots

Video made by a Youtuber Dr_Horse

Thanks for sharing all of that! It really helps

This is a pretty promising-looking game! I hope you keep up the good progress :)